It's not what you are eating, it's what's eating you…

When our musical “Dove” died/Reflecting on Prince’s death, 6 months later… 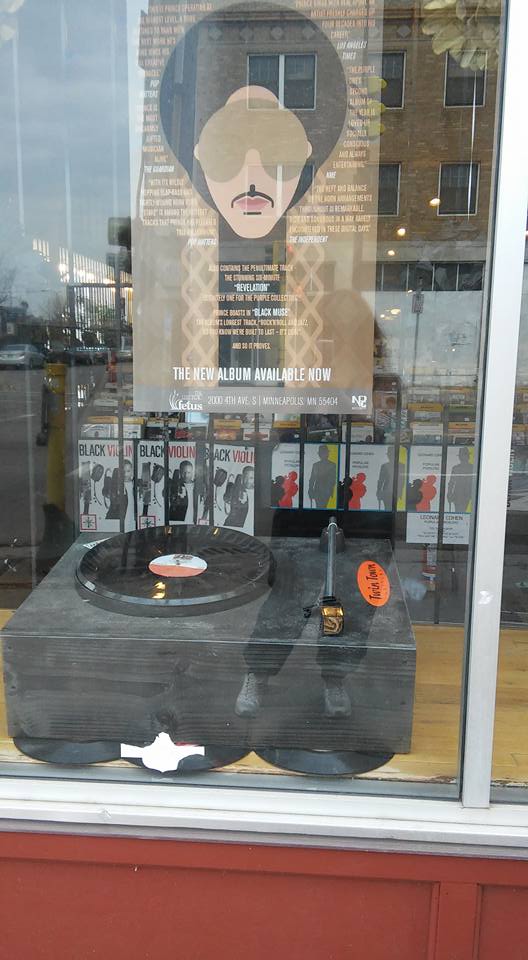 (above photo credit: Me, which I didn’t realize I could actually prove, until I found the pic and put in this blog, taken 6 weeks prior to Prince’s death @ Electric Fetus in Minneapolis)

And many thanks to Target. As their corporate headquarter’s LED light show reminded me, that I need to do this, as it was purple last night, I’m thinking given that today, it’s been exactly 6 months since Prince died.

And I finally need to say something via my blog.

I wanted to write a blog when Prince died. I, like millions of others were greatly saddened and felt a great loss.

It’s actually a good thing I didn’t write anything. Because I would’ve bet ANYTHING, that his death could’ve   NOT been drug related. And I was so angry regarding the global phenomenon that became of his death, because not unlike Robin Williams’s death which I’ve blogged about, because of the constant speculation and constant global chatter about it, online and off.

There’s something that Prince, Robin Williams and I have/had in common.

We all are/were extraordinarily PRIVATE people.

But I have the benefit and luxury of anonymity in having privacy in all aspects of my life, not being a celebrity or a genius in the performing arts.

As far as Prince is concerned, I loved quite a bit of his music. I thought it was awesome that he considered Minnesota home.

But on the off chance, others who might feel like I do, I’m going to say what I have been feeling.

HOW THE FUCK DOES SOMEONE WHO GAVE SO MUCH, LOSES HIS PRECIOUS PRIVACY IN DEATH???????

But I guess as a lawyer said in a local paper, no one is entitled to privacy, after their death.

You want to honor the extraordinary gift that he was to us as a man or musician?

Great… Don’t infringe on how felt about  his copyrighted work. Try to get behind one of many of  causes that he felt passionately about. Refuse to endorse in any way, anything that does not respect for what you know of what he believed in. Especially when it comes to his privacy which he treasured almost as much as the music that he gave us. Don’t act in a manner, as far as he was concerned, that you couldn’t defend to him, if he was still alive.

It’s NOT anything honoring him, as the exploitation of Prince, in principle and for profit,that has happened of Prince, in his death and after it. It’s AWFUL and it needs to STOP…….

THIS IS WHAT IT SOUNDS LIKE WHEN DOVES CRY…..

Note: As a reminder I’m a disabled blogger. My blog while not a dictatorship is not a democracy. I do encourage dialogue or respectful disagreements of opinions. I will not post any comments that are triggering to me, or another. I respect and don’t cause hurt on other people’s spaces in the internet, when I disagree, and I hope you’ll show me the same courtesy. Thanks!!!!

What happened to Kim Kardashian West in Paris and the fallout is NOT OKAY!!!